It has been a lovely weekend in the fitnessnfoodie life. This post might be a bit different than the usual and pretty long, but I promise there is a super yummy recipe at the end 🙂

The weekend started off with an awesome concert Friday evening with some friends. It was a concert that was compiling of about 10 christian bands and 1 speaker, Tony Nolan. I went last year and it was awesome, but this year was much better. There was seriously something there for everyone, hard rock, hip hop, soft rock, worship, alternative, just about every genre of music there is it was there. Even if you aren’t a christian if Winter Jam is coming to your area check. it. out! It is $10 at the door, which is phenomenal given the entertainment, it was a really good time! The Newsboys certainly know how to rock the house and the crowd was loads of fun!

The only picture we got at the concert was blurry and silly... this pretty much sums up our relationship tho. haha

One thing that was touched on continually was the lack of love that many people in this world experience. So many people feel as though they are unloveable because of mistakes that they have made or because selfish people have rejected them time and time again. Being on a college campus I see these loveless “relationships” all the time, and the acceptance that people have for them. But what they don’t know is they are shutting themselves off from the real, true love that everyone deserves. I’m not trying to judge or preach to anyone, but I look around at the world and my heart breaks. My heart breaks because some people don’t know what it is like to be loved because they have been shut out time and time again. Because there are broken families, broken relationships, and lies. Because people are just in it for themselves and don’t care what their actions do to others as long as they get what they want. What kind of life is that? We were created to serve one another and to love and show compassion.

Whether you are a Christian or not you were made with a servant’s heart. I don’t think there is anyone out there who doesn’t feel an immense sense of happiness and gratification after serving another person. Whether it is at the local soup kitchen, across the world, or just helping out a neighbor or friend.

Don’t get me wrong, I do think there is plenty of good in this world and people with good hearts. It just see a lot of broken people and I want to help and to show them they are worthy of love. Whether that love is self love, love from the lord, or another person we are all worth it! The lord loves us more than we could EVER imagine.And if there is one thing that I have learned is that we must love ourselves before we can fully understand what it means to love others….. this may be the beginning of a small self love series on this here blog. I think it is something that can never be read or talked about enough, because we all at some point or another struggle with it. Whether it is loving how your body looks/feels or loving yourself for you are as a person, we all deserve it and yet it seems like such a hard concept to grasp at times.

After the concert Friday night I was pretty tired, and headed home to get some sleep. I woke up around 8 on Saturday and hit the pavement for 6 miles, in the snow. It felt great! One of the best runs I have had in a while. The snow falling was beautiful along the trails! After I headed home and showered the snow was REALLY picking up and the flakes were huge! I knew we were in for more than the inch that was called for, so I ate some breakfast and headed out the door to accomplish some school work. 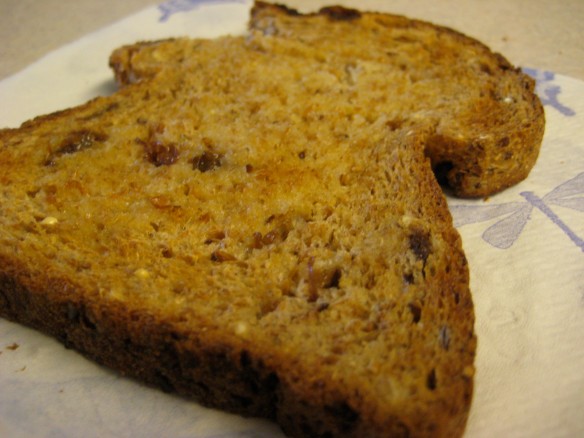 I got some of my work done and around 1:30 decided it was time for some lunch. I had a few leftovers from the week in my fridge and decided to combine a few. Butternut Squash soup and the Israeli cous cous mishmash with an apple on the side. It was a delicious combo!

Productivity ended about here for the day…. I had been battling a pretty bad sinus headache all day and decided to try and nap it off. The nap was exactly what I needed! Then the fun for the night began! A friend and I decided we wanted to make some awesome new recipes this weekend, so we set out to make some Spinach Strudel (recipe below). It was amazing and so fresh tasting and actually not that hard! Also perfectly paired with some white wine and veggies and hummus. Such a Mediterranean dinner….. now that I look back many of my recipes are rather Mediterranean, I guess its what I like which is a good thing due to the awesome health benefits!

What's not to love here!?

3 garlic cloves, minced and sauteed with the onions

1/2 cup golden raisins (sounds weird, but seriously made it!)

2 TBsp oregano (the recipe calls for fresh, but we used dried and it worked fine)

2 TBsp lemon juice, (again calls for fresh but we used bottled and it worked fine)

A dash of salt and pepper

Preheat oven to 400 degrees and adjust oven rack to middle of the oven. Mix feta, ricotta, onion, garlic, raisins, pine nuts, oregano, lemon juice together in a large mixing bowl. Stir in spinach until uniform and season with salt and pepper.

Filling.... this one had mozzerella cheese, because we ran out of feta for the second one.

Line a large baking sheet with parchment paper. Layer phyllo dough sheets one on top of the other spraying each liberally with cooking spray.

Mound the spinach mixture into a narrow log along the middle of the phyllo dough, leaving about a 2 in border at the bottom and 1/2 inch on the sides. Fold bottom layer over top of the spinach mixture and continue to roll the dough around the filling into a tight log, leaving the ends open.

Make sure the seam side is down. Slice 1 1/2 inch slits to vent at a diagonal. Place in oven and bake until browned about 20-25min.  Let the strudel cool about 10 min then slice into pieces.

We made two, because we were serving 6 very hungry people but the recipes is for 4. 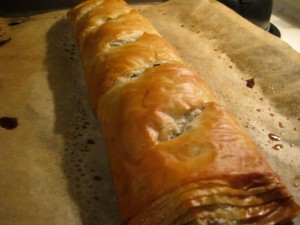 I hope you all had a wonderful weekend as well! I am ending mine with lots of homework and some grocery shopping!

How would you “define” your diet?

Mine is pretty Mediterranean… lots of healthy fats, fruits, veggies, and some baked goods 🙂

“You, my brothers were called to be free. But do not use your freedom to indulge in sinful nature, rather serve one another in love.” – Galatians 5:13

A twenty-something girl trying to balance the demands of life with some fun in the kitchen and on the pavement.